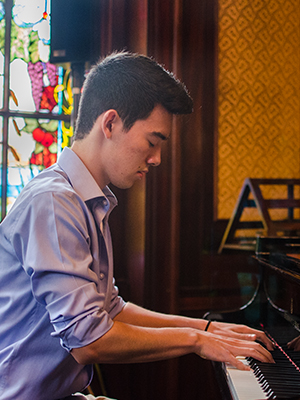 Harry Rylance is a young musician with extensive international experience. British by birth but a global citizen by circumstance, the 18 year-old pianist has lived and studied in Korea, Hong Kong, New Zealand, Hungary and the U.S. Aged 11, he relocated to Budapest at the invitation of the Liszt Academy’s School for Exceptional Young Talent. During his four years in Hungary, he worked with a number of outstanding teachers including Jenő Jandó, Péter Nagy and the legendary Zoltán Kocsis. In January 2009, aged 12, he performed with the Liszt Chamber Orchestra in the historic Grand Hall of Budapest. Later the same year, he performed in front of capacity audiences in Seoul and Taegu as a featured soloist with the Liszt Academy Symphony Orchestra on its concert tour of Asia. Harry currently attends Boston’s Commonwealth School and has private piano studies with the respected artist and teacher, Sergey Schepkin. Harry has also studied with Choong-Mo Kang at The Juilliard School in New York. His performances in Boston include numerous solo recitals and concerts with the Boston Civic Symphony Orchestra and also the Wellesley Symphony Orchestra. Harry will relocate to London in September 2015 to commence a scholarship at The Royal Academy of Music.