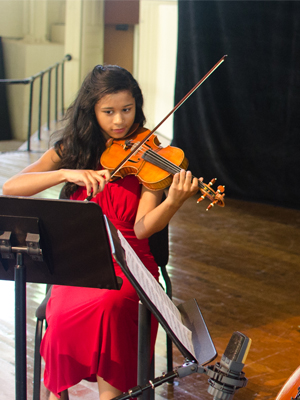 Hannah returned to From the Top to perform on the Juneteenth special, aired on June 14, 2021.

Violinist Hannah White has soloed extensively throughout the United States and Europe.  Hannah has been described by The New York Times as, “terrific… expressive… enthusiastic”, and NY Concert Review wrote “phenomenal…blaze… commanded … perfect intonation and flair”, and Cleveland.com as “clinched her Severance Hall debut…razor-sharp… future is bright”.

Hannah has earned First Prize at dozens of competitions for solo and chamber at the local, national and international level.  Hannah has received many honors and awards as Isaac Stern Award at Carnegie Hall, Chicago Musicians Club of Women, and Ambassador of Double Stop Foundation.

Hannah has been admitted into the renowned studio of Robert LIpsett, with whom she presently studies at the Colburn Conservatory of Music.

From the Top · Hannah White, violin