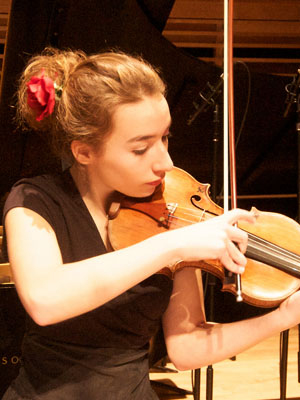 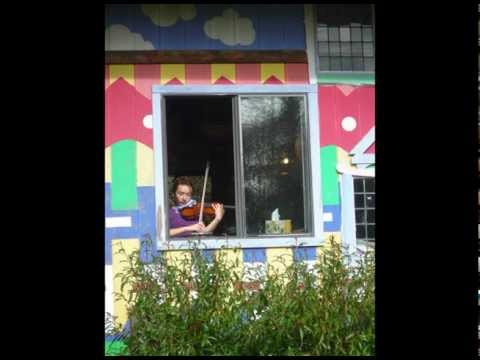 In 2013, Gloria was selected as one of ten exceptional Student Artists to Participate in 2013 Starling-DeLay Symposium for Violin Studies.

In 2013, Gloria performed on King FM in Seattle.

In 2013, Gloria gave a talk as part of Whidbey WOW Series.

Gloria Ferry-Brennan appeared most recently on Show 247, recorded in February 2012, at age 15.

Gloria Ferry-Brennan, 16, began playing the violin at age four and is currently a student of Simon James and piano accompanist Hiro David of the Coleman Violin Studio in Seattle, Washington. Her recent summer studies have included the Brian Lewis Young Artist Program in Kansas, as well as the Aspen Music Festival where she studied with Paul Kantor. She has served as concertmaster for the Seattle Youth Symphony Orchestra and is a member of Whidbey Island’s Saratoga Orchestra. Ms.Ferry-Brennan is in several small ensembles including 3 Cent Stamp, which will perform at Djangofest Northwest next fall. She appeared as a soloist with the Seattle Symphony Orchestra, the Saratoga Orchestra, the Ottawa Chamber Orchestra, the Seattle Festival Orchestra, Philharmonia Northwest Orchestra and the Sammamish Symphony Orchestra as well as the Seattle and the Everett Youth Symphony Orchestras. In 2011, she was the national winner of the Music Teachers National Association Junior Strings Competition and won first place in the elementary and junior division of the Simon Fiset String Competition. In 2012, Ms. Ferry-Brennan received 3rd place at the Johansen International Competition for Young String Players in Washington D.C., where she returned this April to solo with the Avanti Orchestra. In May 2013, she will solo with the Philharmonia Northwest Orchestra as a concerto competition winner of the Seattle Young Artist Music Festival. Recently she was featured on From the Top on NPR. In addition to receiving the Jack Kent Cooke Young Artist Award, Ms. Ferry-Brennan is also a 2009 recipient of the Jack Kent Cooke Young Scholars Award.

Show 247, Brunswick, ME
I. Allegro con fuoco from Sonata by Francis Poulenc

From the Top · Gloria Ferry, Violin