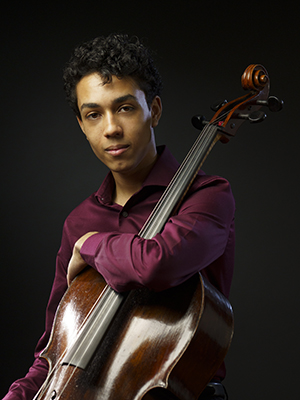 George Wolfe-McGuire (cello), 17, of Amityville, New York, has studied cello since age four and is now in his fourth year at the Pre-College Division of The Juilliard School as a student of Fred Sherry.  George was a semifinalist in the 2020 and 2021 Junior Division of the Sphinx Competition and is a recipient of the Sphinx Organization’s MPower Artist Grant. In the summer of 2017, George attended the Sphinx Performance Academy at the Cleveland Institute of Music where he performed in the masterclasses of Richard Weiss, First Assistant Principal of the Cleveland Orchestra. An active member of the Metropolitan String Orchestra since 2013, George has performed as a soloist with orchestras and string ensembles in many venues in the New York metropolitan region. In 2019 he received the Paul Rudolff award, given as a second prize in the annual Island Symphony Orchestra Young Performer’s Competition.

Recently, George has also been awarded first prize as well as the Waltham Cello Scholarship at the 2021 Kings Peak International Music Competition. George has spent summers honing his cello skills at the Bowdoin International Music Festival, The Meadowmount School of Music, Junior Greenwood Music Camp, and The Heifetz International Music Institute. Since the spring of 2019, George has been volunteering as OMP Ambassador, mentor, and cello instructor at the Opportunity Music Project, a non-profit that provides free instruction, instruments, and performance opportunities to young musicians in diverse underserved communities in New York City that traditionally do not have access to classical music education. George is also a member of the Back to Bach Project (BTB), where he performs for and speaks to young school children to expose them to classical music, as well as a cello teacher at the Do Re Mi Project. George is a ranked saber fencer who has competed in tournaments around the country including Nationals and the Junior Olympics.