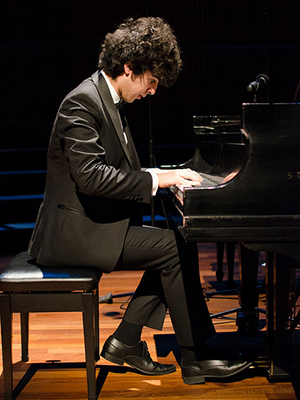 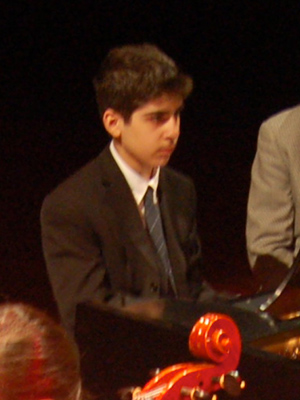 Evren Ozel (piano) began his musical education at age three, taking lessons at MacPhail Center for Music in his hometown of Minneapolis, Minnesota.  He has performed with numerous orchestras including the Cleveland Orchestra, Jacksonville Symphony, RTÉ National Symphony Orchestra, Minnesota Orchestra, and Boston Pops.  He has taken masterclasses from Andras Schiff, Richard Goode, and Paul Lewis, as well as many other notable artists. His achievements include scholarships from the U.S. Chopin Foundation and the YoungArts Foundation, first prize at the 2016 Boston Symphony Concerto Competition, second prize at the 2016 Thomas and Evon Cooper International Competition, and second prize (as well as the Mozart and Chopin prizes) at the 2018 Dublin International Piano Competition.  He has performed twice on From the Top, as a soloist and as a chamber musician, and has participated in festivals such as Marlboro Music Festival and International Mendelssohn Akademie Leipzig.  He has studied piano, theory, composition, and conducting with Dr. Paul Wirth, Dr. Sarah Miller, and Courtney Lewis. A 2017 graduate of the Walnut Hill School for the Arts, he now attends New England Conservatory, where he studies piano with Wha Kyung Byun.

Evren Ozel (piano), 17, hails from Minneapolis, Minnesota, and lives in Boston, Massachusetts, where he studies with Wha Kyung Byun in the joint program between the Walnut Hill School for the Arts and the New England Conservatory Preparatory School. Evren was a semi-finalist in the Cleveland Piano Competition for Young Artists and a scholarship recipient from the Chopin Foundation of the United States. He recently attended the Oxford Philomusica Piano Festival in England where he had the opportunity to perform in masterclasses with Ferenc Rados, Menahem Pressler, and András Schiff. He has previously appeared on From the Top on Show 249 recorded in Carmel, Indiana. Outside of music, Evren satisfies his academic curiosity and imagination by immersing himself in his schoolwork.