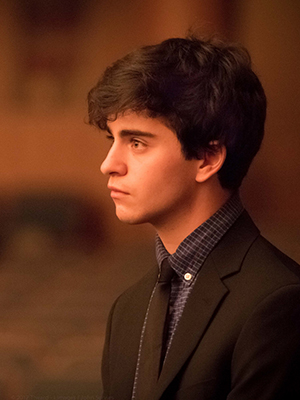 Ethan’s compositions were performed by the Buffalo Philharmonic Orchestra on Show 333 in Buffalo, NY on March 7, 2017.

Ethan Treiman, 18, is a senior at Crossroads School for the Arts and Sciences in Santa Monica, California. He is one of four Los Angeles Philharmonic Composer Fellows (2015-2017). His works have been played by the Los Angeles Philharmonic Orchestra as part of their Symphonies for Schools concerts. He attended the Young Artists Composition Program at Boston University Tanglewood Institute in 2016. Ethan is a National YoungArts “Honorable Mention” in Classical Composition. Ethan plans to write music for concert, film, and theater; Ethan performed an original one-act musical in 2016, titled “Ethan and Julia Sing Love Songs.” He also enjoys playing piano, running, and spending time with his dog, Butter.

Ethan’s appearance on From the Top is made possible with support from the ASCAP Foundation Irving Caesar Fund.