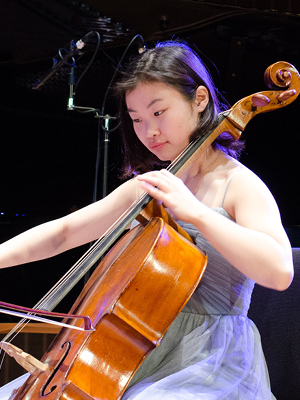 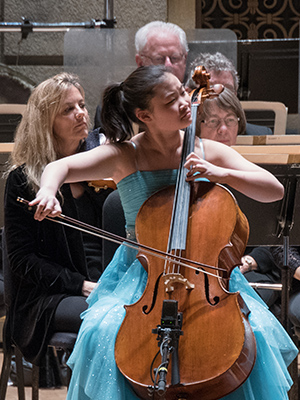 Esther Yu (cello), 18, is a freshman at Harvard University and previously appeared on From the Top at age 15. A native of Rye, New York, she studied with Clara Kim at The Juilliard School’s Precollege Division from 2011-2018. She was a third prize-winner of the Johansen International Competition for Young String Players and a YoungArts Finalist in 2018. Outside of music, Esther loves traveling, playing tennis, and eating good food.

Esther Yu (cello), 15, is from Rye, New York, and attends Rye High School while studying cello with Minhye Kim in The Juilliard Pre-College Division. She won third prize in the 2015 Johansen International Competition in Washington, D.C., and was a semifinalist in the eighth International Tchaikovsky Competition for Young Musicians. She is also the principal cellist of the Juilliard Pre-College Symphony. Outside of music, Esther loves to volunteer for non-profit organizations, inspired by her father, who goes to Peru as a medical missionary.