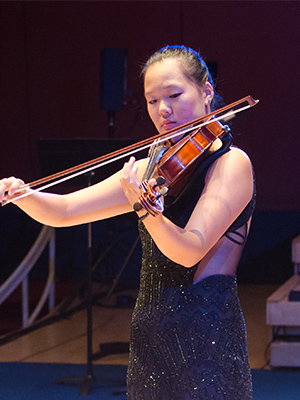 Erin Pitts (viola), 18, is from Atlanta, Georgia and currently attends The Juilliard School, where she studies with Heidi Castleman and Hsin-Yun Huang. She first appeared on From the Top when she was 17. Her favorite musical experience was playing in Carnegie Hall with the National Youth Orchestra of the United States in 2014. In her free time, Erin likes to read and write poetry, dining in New York, and spending quality time with friends.

Erin Pitts, 17, viola, is from Atlanta, Georgia, where she attends Chamblee Charter High School. She has been playing the viola for five years and she currently studies with Marilyn Seelman. She attended the Meadowmount School of Music in 2013, and has received top awards at several competitions, including the Atlanta Youth Symphony Orchestra Concerto Competition, the Rising Stars Festival of Arts competition, and the Samuel A. Fordis concerto competition. Erin has served as principal viola of the Atlanta Symphony Youth Orchestra for three seasons. She often plays for the residents of her grandmother’s memory care center. Outside of music, Erin enjoys going to movies and ice skating.

Show 311, Atlanta, GA
The first movement, Fantasie, and the second movement, Theme mi Variationen, from the Sonata for Viola and Piano, Op. 11, No. 4, by Paul Hindemith