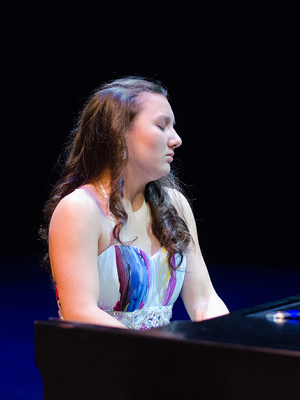 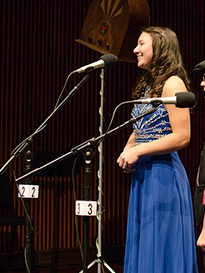 Emma Taggart (piano), 16, from Blaine, Minnesota, has already received widespread acclaim, performing in concert venues throughout the United States and Europe. She has been the recipient of prestigious awards, such as From the Top’s Jack Kent Cooke Young Artist Award and the Grand Prix of the St. Petersburg, Russia, International Piano Festival. She has performed with numerous orchestras, including the MN Orchestra and the Milan Chamber Orchestra. She has given hundreds of solo and duo concerts alongside her brother, Jacob, as the piano duo Taggart Squared. Outside the classical realm, she has opened for the iconic rock band, The Goo Goo Dolls, and has even been featured with Sheila E (Prince’s former drummer). She is thrilled to be making her third appearance on From the Top. Emma is a student of Dr. Reid Smith. For more information about Emma, please visit www.taggartpiano.com

Emma Taggart (piano), 13, is from Blaine, Minnesota, and is a freshman at St. Agnes School and is a student of Dr. Reid Smith. A prize-winner of numerous competitions including the Thursday Musical Competition and the Art of Piano International Competition, Emma has also participated in many festivals across Europe, especially in Italy including the Lovere Music Festival and Accademia Tadini International Music Festival. Emma has also performed in masterclasses for Oxana Yablonskaya, Vincenzo Balzani, Alexander Yakovlev, and Shuku Iwasaki. In her free time, Emma runs as a member of a junior-Olympic track team and enjoys skiing and writing poetry.