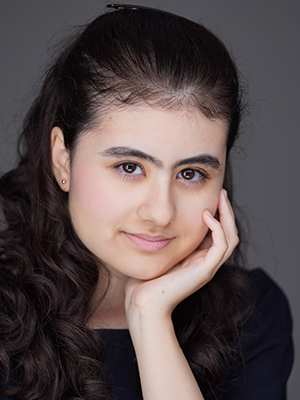 Since appearing on From the Top, Ellen won 1st Place at the William Knabe International Piano Competition and was named a Musical Arts Center of San Antonio Young Artist Award Recipient. She was invited to perform at the opening of Texas Public Radio and the San Pedro Cultural Creek. She also received the MENSA Honor Society Platinum Award for her volunteer work.

Ellen Foreman (piano), 16, hails from San Antonio, Texas and is a junior at Kolbe Academy. She studies piano with Professor Victor Rosenbaum at the New England Conservatory Preparatory School and Peter Steigerwald at MACSA in San Antonio. She has won numerous competitions, including the Texas Public Radio Young Talent Competition and the Steinway and Sons Junior Piano Competition. She has taken masterclasses with Olga Kern, Stanislav Ioudenitch, Alexander Korsantia, Ingolf Wunder, Simone Dinnerstein, Pavlina Dokovska, Boris Slutsky, and Michael Lewin, among others. As the recipient of the Adam’s Music House Fellowship, Ellen performed a lecture recital live on KMFA. Recently, she was selected as an artist for the WPTA-Missouri Young Musician Series and as a Piano Fellow for the Claudette Sorel International Piano Competition. She was also featured as a pianist in the Goethe-Institut Boston’s Beethoven project. Last summer, she was invited to participate in the Texas State International Piano Festival, the PianoTexas International Academy and Festival, the Baylor Summer Piano Institute, the Puerto Rico International Piano Festival, and the Eastman Summer Classical Studies Program. Outside of piano, Ellen enjoys writing, composition, and mathematics. She is co-captain of the Spiritual Life Club, lead designer of the Newsletter Club, social media intern and newsletter editor at Musicale, and director of the Back-to-Bach San Antonio region. Ellen is also a member of Duke TIP and the MENSA Honor Society.