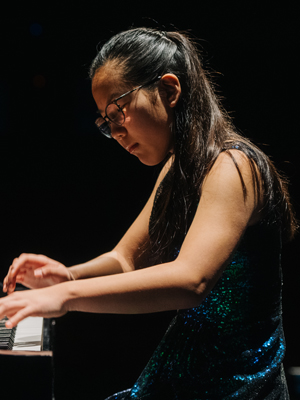 Ella Kim (piano), 12, lives in Herndon, Virginia, where she is in sixth grade at Navy Elementary School. She first appeared on From the Top last summer as part of an eight-handed piano ensemble in San Marcos, Texas.  Ella studies piano with Dr. Wen-Yin Chan at the Levine School of Music. Her proudest musical achievement has been performing at the Kennedy Center Millennium Stage, after winning first place in the International Young Artist Piano Competition in Washington, D.C. Outside of music, Ella enjoys tae kwon do, art, and swimming.