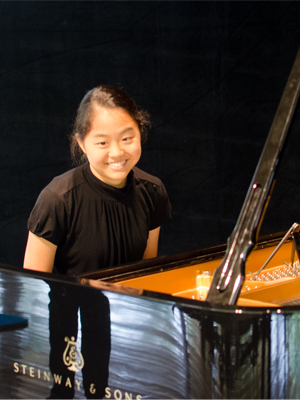 Elisabeth Tsai (piano), 15, is from Phenix City, Alabama. An early graduate of Hope Christian School, she plans to attend Schwob School of Music at Columbus State University. In 2014, she was awarded the First Prize and Best Solo Award at the Arthur Fraser International Piano Competition, and was given the opportunity to perform with the South Carolina Philharmonic. Also in 2014, she was the First Prize winner and the recipient of the Chopin Prize in the national finals of the Music Teachers National Association (MTNA) Junior Piano competition.  Other first prize awards include the 2014 New York International Artists Competition, the 2014 Blount-Slawson Young Artists Competition, the 2013 Zelpha Wells Piano Competition, the 2012 Lois Pickard Scholarship Competition, and the 2012 Indian Springs Piano Competition. She frequently performs with her older brother Eric Tsai, who is a From the Top Alum.

From the Top · Elisabeth Tsai, piano