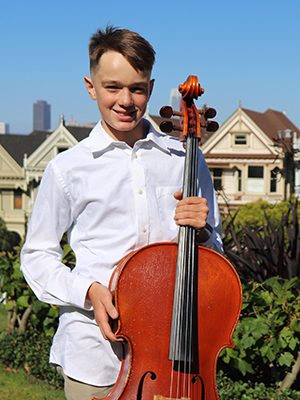 Elijah de la Motte (cello), 15, from San Francisco, California, is in the tenth grade at the Compass Charter School. He studies cello with Jean-Michel Fonteneau at the San Francisco Conservatory of Music’s Pre-College Division. Elijah enjoys participating in music competitions and won first place in the Music Teachers Association of California VOCE state finals. He also appeared on America’s Got Talent Season 15. His music has attracted over 48,000 Instagram followers. One of nine children, Elijah performs with his four oldest siblings throughout San Francisco, and he also enjoys playing cello duets with his nine-year-old sister. Outside of music, Elijah’s hobbies include cooking, reading, skateboarding, and drawing.