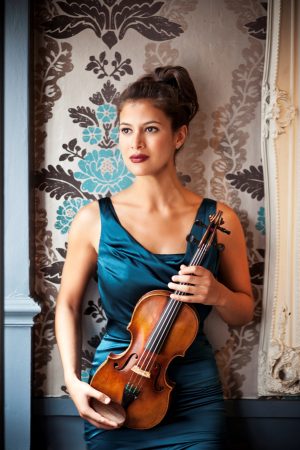 Violinist Elena Urioste, hailed by The Washington Post as “a drop-dead beauty who plays with equal parts passion, sensuality, brains and humor,” is a first prize winner in the Sphinx and Sion International Violin competitions and was recently selected as a BBC New Generation Artist. In addition to recital and chamber music appearances at Carnegie Hall, the Kennedy Center, London’s Wigmore Hall, and the Marlboro, Moab, and Sarasota music festivals, she has performed with such major U.S. orchestras as the Boston Pops, Philadelphia Orchestra, Cleveland Orchestra, and American Composers Orchestra; the New York, Los Angeles, and Buffalo philharmonics; and the Chicago, San Francisco, National, Atlanta, Baltimore, Detroit, and Pittsburgh symphonies. Ms. Urioste has appeared in the U.K. with the Hallé Orchestra, Philharmonia Orchestra, BBC Symphony, and Royal Liverpool Philharmonic, among others, and in France and Hungary with the Orchestre National de Lille, Orchestra Dohnányi Budafok, and MAV Orchestra. She has performed extensively in recital with pianists Michael Brown and Tom Poster; with the latter she recorded her most recent album, Estrellita, released in 2018 on the BIS label. Her 2019-20 season includes engagements with the Atlantic Classical Orchestra, Louisville Orchestra, Minnesota Orchestra, and the Rogue Valley, San Diego, and Virginia symphonies. Ms. Urioste is a graduate of the Curtis Institute of Music and completed graduate studies at The Juilliard School.