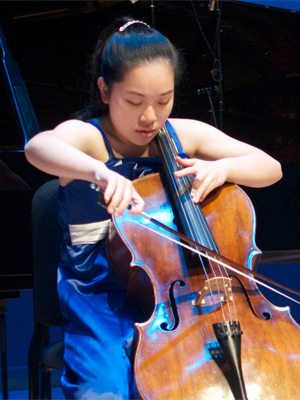 Elena performed both as a soloist and as a member of the Cambiata String Quartet on Show 301, recorded in San Francisco, CA, on February 14, 2015.

Elena Ariza (cello), 16, is from Cupertino, California, where she attends the Menlo School. She studies with Eric Sung at the San Francisco Conservatory of Music, where she is also a member of the Cambiata String Quartet. Elena performed with the Palo Alto Philharmonic as winner of their concerto competition in 2013, and was also named as a Grand Prize winner of the Diablo Valley College/Holy Names University Youth Competition in 2014. Elena performed at Weill Recital Hall in Carnegie Hall in 2012, as a winner of both the American Fine Arts Festival and American Protégé International Piano and Strings Competition. She has attended the Aspen Music Festival and School in 2013 and Music@Menlo Chamber Music Festival and Institute from 2010 to 2013. Outside of music, she enjoys crafting, particularly miniature paper crafts and 3D geometric origami.

From the Top · The Cambiata Quartet