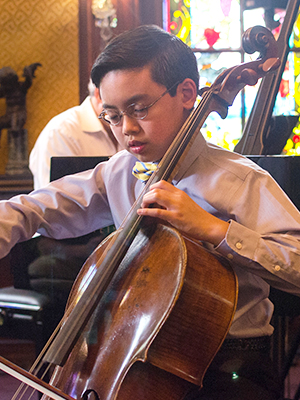 In 2015, Dylan was the silver medalist at the IX International Tchaikovsky Competition for Young Musicians in Siberia! Watch his winning performance with the Belarus Orchestra of the Rococo Variations by Tchaikovsky.

Dylan Wu, 10, cello, hails from Manhasset, New York, and has been playing the cello for 6 years. Dylan has garnered several top accolades, including being named an Award Winner in the 8th International Tchaikovsky Competition for Young Musicians in Moscow, Russia, as well as being named Grand Prize winner in the Adelphi Chamber Orchestra Concerto Competition, among others. He attends the Juilliard School Precollege under the direction of Minhye Clara Kim. Asides from music, he enjoys playing chess, reading, playing tennis and playing golf.