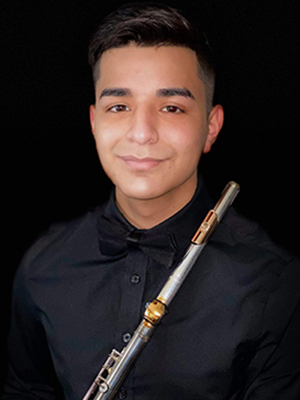 Diego Arias (flute), 18, hails from Brownsville, Texas, where he is currently a senior at Simón Rivera Early College High School and an adjunct student at Texas Southmost College. Diego began his flute studies in middle school at the age of 11, quickly gaining an ardent love for music as he continued his studies into high school. However, due solely to circumstances within his area and family, Diego has been unable to have access to private lessons and, as of the time of writing, remains primarily self-taught. He is immensely grateful to Leilani Ramirez, his high school’s woodwind specialist and assistant band director, who has served as his main mentor, guide, and teacher.

Diego’s success can be seen through his various performances in the Texas Music Educators Association (TMEA) All-State Ensembles, with the most notable being that of his performance in Dmitri Shostakovich’ Symphony N.10 in E-Minor, as assistant-principal flute of the 2020 TMEA All-State Symphony Orchestra. Through the TMEA All-State Competition, Diego has also received various state rankings, with the highest being second in the state of Texas on his respective instrument during his sophomore year.

In his free time, Diego writes, reads, and spends time with family and friends, and also serves as a free flute tutor through the Do Re Mi Foundation. He hopes to pursue a solo career in music and inspire many in the same way that many others have inspired him.