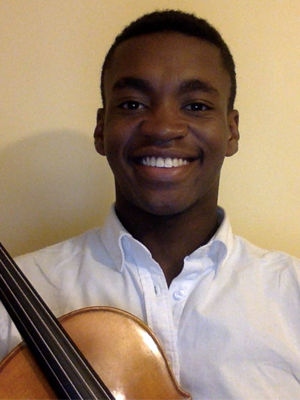 DIDIER LUCCEUS, a high school senior, has been playing the viola for four years though he began studying violin at the age of 7. He currently studies with Ronald Gorevic and spent the last year abroad in France studying with Carol Foucher at the Conservatoire Regional de Bretagne. At conservatory in France, he was a member of L’Orchestre des Jeunes as well as a string quartet. Currently, he plays in the New England Conservatory Youth Philharmonic Orchestra under the direction of Hugh Wolff and David Loebel. For the past five summers, Didier has been a member of New England Conservatory’s Festival Youth Orchestra. This summer, along with another CDAL musician, Corinne Auger, he co-ran Music Lens Boston, a program to introduce children to classical music.

Didier is a member of the Center for Development of Arts Leaders (CDAL) in Boston.
Class Year: 2016