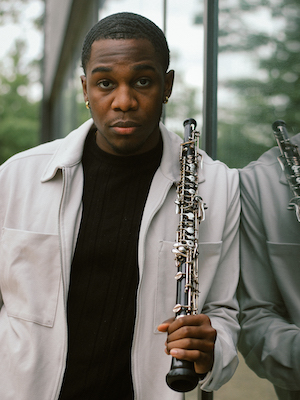 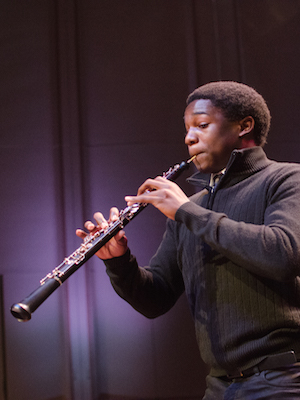 David Guest Hosts From the Top’s Black History Month Special in 2022 alongside host Peter Dugan. He previously appeared on Show 315 in Naples, FL, on November 17, 2015 at age 17.

A graduate of the New England Conservatory of Music, David Norville has been recognized by organizations like YoungArts, Sphinx, and the Jack Kent Cooke Foundation for his merits as an oboist and young artist. David is the co-founder of the music education organization, ClassiX Arts, an organization dedicated to igniting creative agency in young Black students through providing free conservatory level training, an immersive afro-centric educational experience, and cultivating a fortified ecosystem of Black classical artists.

He currently serves as Assistant Producer for NPR’s From the Top. David also is the Director of Operations and Community Engagement for the Boston-based concert series Castle of Our Skins. David’s work is reflective of his Afro-Diasporic identity, his adversity, and the values instilled into him through his upbringing. As an oboist, David plays with the Sound Garden Woodwind Quintet, dedicated to “planting music in unexpected places”

Unity, self-determination, collective work and responsibility, and cooperative economics undergird David’s work deconstructing race and social-class through multifaceted artistic lenses. He aspires to use his platforms  to economically empower artists of the African diaspora through the production of online educational platforms, multimedia concert curation, and mentorship.

David Norville (oboe), 17, is from Fort Myers, Florida, and studies under Daniel Stolper at the Interlochen Arts Academy. He has been a part of Interlochen Academy Orchestra and Interlochen Academy Wind Ensemble, and has also participated in Interlochen Arts Camp, French Woods Festival, and Festival of Winds. David is the recipient of From the Top’s Jack Kent Cooke Young Artist Award. He has also gotten the Jillian Prescott Award. Outside of music, David loves to read, exercise, and care for his dog.

HL35 | Black History Month Special
We revisit David's 2015 appearance and learn about his work today as a young arts leader, oboist, and Assistant Producer at From the Top.

From the Top · Oboist David Norville

Show 315, Naples, FL
I. Munter from the Sonata for Oboe and Piano by Paul Hindemith