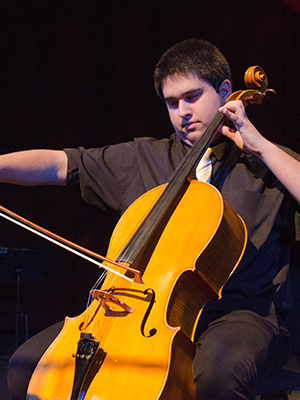 David will perform on Show 345 with Quartet Bellezza, to be recorded in September 2017.

David Caplan (cello), 17, from Skokie, Illinois, has been playing cello since he was 9 years old and is currently a senior at Niles North High School. He presently studies with Jonathan Pegis of the Chicago Symphony Orchestra. Before studying with Mr. Pegis, he was a longtime student of Mrs. Adelaide Hagari. He is the principal cellist of the Midwest Young Artists’ Symphony Orchestra and a member of Quartet Bellezza along with violinists Masha Lakisova, Robert Sanders, and violist Peter Dudek. His most precious musical memory was performing Tchaikovsky’s Romeo and Juliet Fantasy Overture under the baton of Gennady Rozhdestvensky at Symphony Center in downtown Chicago. Outside of music, David loves traveling, watching documentaries, and spending time with friends.