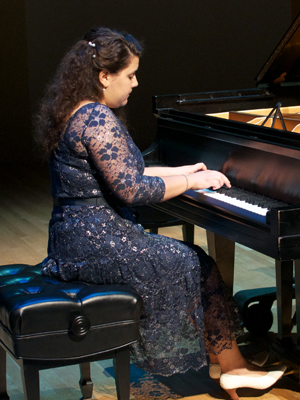 The Shapka Trio is comprised of clarinetist Christopher Pell (18, Bronx, NY), cellist Madeline Fayette (17, Wading River, NY), and pianist Dasha Burkhartseva (16, New York, NY). They are coached by Anthony Brackett of the Juilliard School Pre-College Division. Both Christopher and Dasha are past recipients of From the Top’s $10,000 Jack Kent Cooke Young Artist Awards and have previously appeared on From the Top.

Show 305, Miami, FL
The first piece, Our Evenings, and the second piece, A Blown Away Leaf, from On an Overgrown Path by Leoš Janáček

From the Top · Dasha Bukhartseva, piano

Show 196, Boston, MA
IV. Allegro from Trio for Clarinet, Cello and Piano in A minor, Op. 114 by Johannes Brahms

From the Top · Shapka Trio

From the Top · Dasha Bukhartseva, Piano