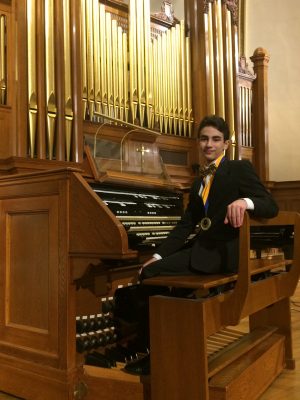 Daniel Colaner (organ), 14, lives in Akron, Ohio and is a recipient of From the Top’s Jack Kent Cooke Young Artist Award. He is a pediatric cancer survivor who began his study of music at an early age as a means of counteracting potential late effects of the chemotherapy he received as an infant. At age 12, He had the opportunity to perform at Carnegie Hall and St. Patrick’s Cathedral and was featured on ABC’s World News Tonight and Good Morning America, Harry (The Harry Connick Jr. Show), and The 700 Club. He currently studies organ with Dr. David Higgs of the Eastman School of Music. He also serves as the Organ Scholar at Trinity Episcopal Cathedral in Cleveland, Ohio under Todd Wilson and is a scholarship student in the pre-college program at the Cleveland Institute of Music, studying piano with Sean Schulze. In his spare time, Daniel enjoys reading about technology, repairing computers, swimming, tennis, and the company of his calico cat, Imogene.