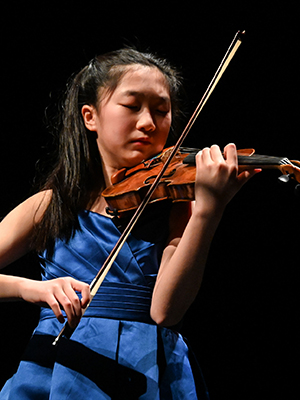 Corina Deng (violin) 12, is originally from Vancouver, British Columbia, and is currently a seventh grader at Shaker Heights Academy in Cleveland Ohio. She studies violin with Jaime Laredo and Jan Sloman at Cleveland Institute of Music Preparatory Program. Corina won the first places in the Canadian National Music Competition both in 2014 and 2017. She made her orchestral debut at age 8 and gave her first recital at age 10. She has played with the Vancouver Academy Orchestra, BC Richmond Orchestra, and the Cleveland Institute of Music Orchestra. Corina has been invited to play at Cleveland ChamberFest Stars of Tomorrow concerts and was also awarded a full scholarship to attend Heifetz International Music Institute. In her spare time, Corina enjoys reading, dancing, and cooking.