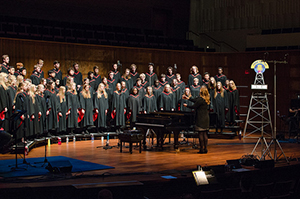 The College in the Schools (CIS) Stillwater Concert Choir is a select, mixed-voice ensemble of 66 voices directed by Angela Mitchell and based in Stillwater, Minnesota. Its repertoire ranges from Gregorian to the avante-garde. The Stillwater Choir has been a featured ensemble at Dorian, Concordia and St. Olaf festivals and has twice performed for the ACDA Choral Arts Finale at Orchestra Hall. In addition to work with individual clinicians they have participated in workshops with Chanticleer, the King Singers, the Minnesota Opera, and The Rose Ensemble.