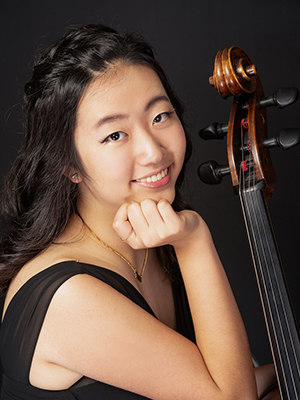 Christy Choi (cello), 18, is a senior at Tenafly High School in New Jersey. She is a recipient of From the Top’s Jack Kent Cooke Young Artist Award. Christy studies at the Juilliard School Pre-College Division with Clara Kim, where she is principal cellist in the Juilliard Pre-College Orchestra. She has also attended the Perlman Music Program. Christy was the youngest cellist to ever win first prize at the Concurso Nacional de Cordas Paulo Bosísio in Brazil. One of her proudest achievements was performing the Elgar Cello Concerto with the São Paulo Symphony Orchestra for public school children from all over Brazil at Sala São Paulo, the biggest concert hall in Brazil. In her spare time, Christy enjoys baking, film/photography, and playing tennis.

Show 398
Elégie, Op. 3 No. 1 by Sergei Rachmaninoff (transcribed For Cello and Piano by A. Vlasov)