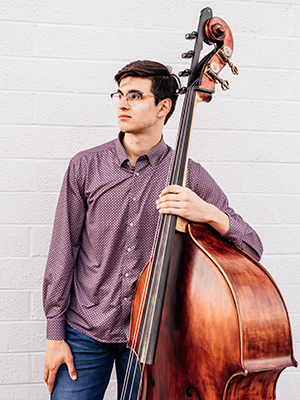 Christian Luevano (double bass), 18, hails from Corinth, Texas, and is a senior at John H. Guyer High School. Christian started studying bass at the age of 5 in Ann Arbor with Derek Weller. In 2009, Christian moved to Texas where he studied with Gudrun Raschen until 2018. Christian currently is a student of Jeff Bradetich. In 2019, Christian attended the Perlman Music Program, in 2020, Christian was scheduled to attend the Boston University Tanglewood Institute, in 2021, Christian was a member of the National Youth Orchestra (USA), and he will performing as a member of the National Youth Orchestra on their 2022 tour to Europe. Christian was a finalist in the International Society of Bassists Age 15-18 Division, won third prize in both the Lynn Harrell Concerto competition and the Eismann Competition, 2nd prize in the Fort Worth Symphony Young Artist Competition, 1st prize in the Rising Talents of America competition, was named a National YoungArts winner as an Honorable Mention, and won 2nd prize in the Greater Dallas Youth Orchestra Concerto Competition. Christian has also been ranked as the #1 high school bass player in Texas two times, #2 once as a freshman, and has made the highest youth orchestra in Texas all four years of his high school career. Since 2019, Christian is the principal bassist in the Greater Dallas Youth Orchestra (GDYO), but he has been a part of the GDYO program since 2013. Christian has also been hired as a member of the lab orchestra for Miguel Harth-Bedoya’s Conducting Institute. Next year, Christian will be attending the Curtis Institute of Music in Philadelphia, where he will be studying under Hal Robinson and Edgar Meyer. When not practicing or performing, Christian enjoys to workout, play sports, hang out with friends, play guitar, and play video games.

From the Top · Christian Luevano, double bass, 18, from Corinth, TX