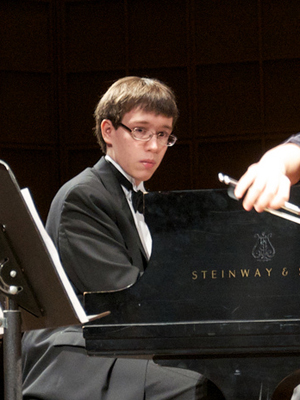 The Dallas Symphony Orchestra will premier one of Chase’s compositions in March 2015! Learn more.

Chase Dobson (composer), 16, is from Dallas, Texas. Chase studies piano performance and composition at Booker T. Washington High School for the Performing and Visual Arts where he studies piano performance and composition with Eva Flowers and Kent Ellingson, and performs with the orchestra directed by Luis Martinez. At Southern Methodist University, Chase studies with piano instructor Matthew Kline and composition professor Simon Sargon. He also studies viola with Laurie Orloff. Chase has been featured and interviewed on Good Morning Texas, WRR Classical 101.1 FMÕs Art Matters, and D Magazine. He also has an interest in foreign language and enjoys traveling. On the broadcast, Chase performs the second movement, Sporting of the Gods, from his own composition, Piano Trio Number 1, joined by Aakash Patel and Russell Houston.