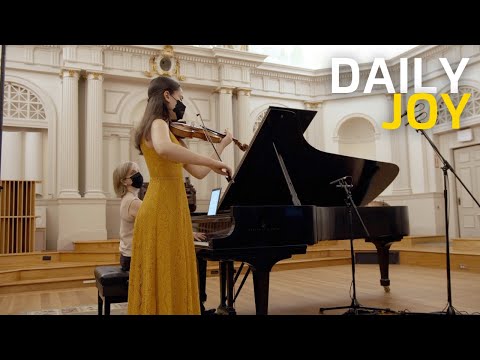 Célina Béthoux (violin), 17, from Shaker Heights, Ohio, began her musical studies at the age of five with Cleveland Orchestra violinist Isabel Trautwein. In the Spring of 2021, she graduated from the Cleveland Institute of Music Young Artist Program, where she studied with Philip Setzer of the Emerson String Quartet and Jessica Lee, Assistant Concertmaster of The Cleveland Orchestra. Currently, she is a freshman at the New England Conservatory, on the Presidential Scholarship, under the tutelage of Soovin Kim. Célina made her solo debut with the Pittsburgh Symphony as First Prize winner of the Duquesne National Young Artist Competition. As a member of the Cleveland Orchestra Youth Orchestra, she served as concertmaster several times, and gave solo performances of the Barber Violin Concerto with the orchestra as a winner of the concerto competition. During COYO’s 2019 European tour, she was selected by conductor Vinay Parameswaran to perform the Schubert Octet as first violinist in a cross-cultural exchange with musicians from the Anton Bruckner University of Linz, Austria, coached by Cleveland Orchestra Maestro Franz Welser-Möst. She also has performed as soloist with several local orchestras, including the Cleveland Pops Orchestra conducted by Carl Topilow. Célina has won top prizes in various competitions and was selected as one of five finalists in the 2020 Barbash International J.S. Bach String Competition. In addition, she received merit scholarships to attend the Music@Menlo and Heifetz International Institute music festivals. As a member of the Lumière String Quartet and Arcus Piano Trio, the ensembles have won numerous titles, including first place and grand prize at the 2019 Coltman National Chamber Music Competition (Junior Division) and silver medal at the 2021 Fischoff National Chamber Music Competition (Junior Division).