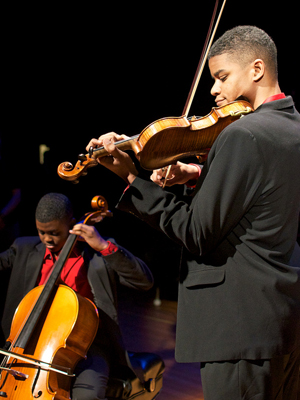 In 2016, Brendon will be participating in the 50 State Sonata Project.

Brendon Elliott (violin), 19, is from Newport News, Virginia, and is currently a student at the Curtis Institute of Music. Brendon has performed as a soloist with the York River Symphony Orchestra, The Peninsula Youth Orchestra, The Richmond Symphony Orchestra, The Symphony of the Mountains, and the Hampton University Orchestra. He was a finalist in the 2010, 2011, and 2012 National Sphinx Competition, earning the National Sphinx Competition Achievement Award in 2012. Brendon was also a National Finalist in the 2011 American String Teacher’s Association National Solo Competition. He has attended the Eastern Music Festival, the Aspen Music Festival and School, and the Heifetz International Music Institute. Outside of music, Brendon enjoys basketball, reading, Wii games, and computer games.

Show 290, Norfolk, VA
Passacaglia in G minor on a Theme by Handel by Johan Halvorsen