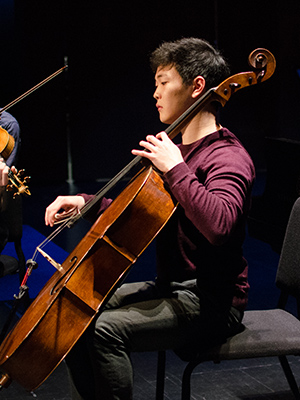 Brannon Cho (cello), is an undergraduate student at the Bienan School of Music at Northwestern University, studying with Hans Jensen. Brannon appeared on NPR’s From the Top with Host Christopher O’Riley on show 231 in New York City in 2011. He received second prize at the 2015 Naumberg International Cello Competition and first prize at the 2015 Minnesota Orchestra Competition. Recently, Brannon was the highest ranked American in the cello division of the 2015 International Tchaikovsky Competition in Russia.

From the Top · Brannon Cho, Cello