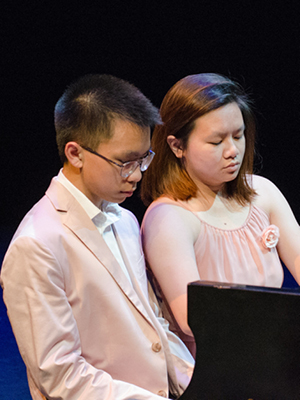 As a piano duo Beatrice, 17, and Ben, 16, Hoang from Austin, Texas have won second at the 2018 OHIO International Duet and Duo Competition and were national finalists at the 2018-19 MTNA Senior Duet Competition.

Beatrice started playing piano when she was 5 and is currently a student of Dr. Saida Kafarova. She debuted with the Austin Civic Orchestra at age 11, and has since played with the Round Rock Symphony and the Monroe Symphony Orchestra. At age 14, Beatrice was a national finalist of the MTNA Junior Piano Performance Competition and in 2017 she won first place at the International Keyboard Odyssiad and Festival and the Carmel Klavier International Piano Competition. Most recently, she performed at Carnegie Hall in May.

Listen to Beatrice and Ben Hoang