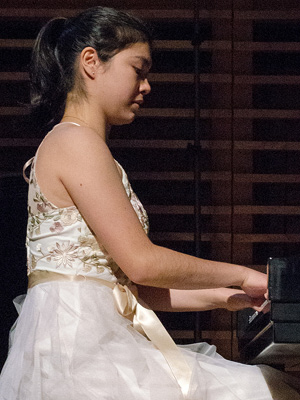 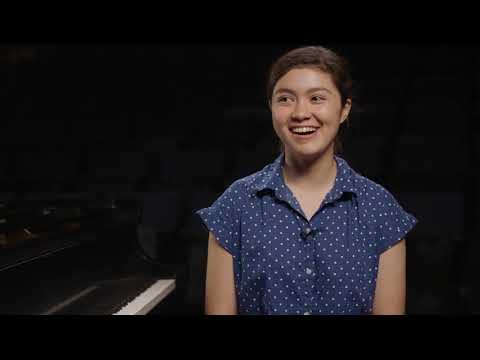 Avery Gagliano (piano), 18, cannot remember a time when music wasn’t a part of her life; it has always been her “most natural form of expression.” At age 9, she made her Carnegie Hall debut and her orchestral debut at the Strathmore Concert Hall. The following year she appeared on NPR’s From the Top and made her solo recital debut. Currently in her third year at the Curtis Institute of Music studying with Jonathan Biss and Gary Graffman, she has taken first prize at the Aspen Music Concerto, MostArts Festival Piano, and Chopin International Piano (Hartford) Competitions, was young scholar of the Lang Lang International Music Foundation, and is a 2019 National YoungArts winner in music. As a soloist and an avid chamber musician, the Washington, D.C.-native has performed in major concert venues in her hometown, as well as across the United States, and in Paris, Oxford, Munich, and Perugia in Europe. During her free time, Avery writes pop songs, and loves to sing, read, and play ultimate frisbee.

Avery Gagliano (piano), 17, is originally from Washington, D.C. but recently moved to Philadelphia to study with Jonathan Biss and Gary Graffman at the Curtis Institute of Music. Avery was first featured on From the Top as a Jack Kent Cooke Young Artist when she was 10-years-old. In addition to performing with orchestras and in concert halls across the United States, she is a young artist of the Artemisia Akademie at Yale, a two-year winner of the US Chopin Foundation Scholarship (2016 and 2017), and a Young Scholar of the Lang Lang International Music Foundation (2014 – 2016). Recently, Avery was named a 2019 YoungArts Winner in Music. She also enjoys singing and writing pop songs, cooking, reading, watching movies, playing ultimate frisbee, and designing jewelry (with shrink art).

Avery Gagliano (piano), 10, is from Washington, D.C, and attends John Eaton Elementary School. She studies with Marina Alekseyeva at the Levine School of Music and occasionally plays with the Maryland Classic Youth Orchestra. In 2011, Avery won a gold medal for the American Association for Development of the Gifted and Talented “Passion of Music” and performed at Carnegie Hall. Avery is kept busy with ballet, swimming, Chinese, and schoolwork, but also enjoys performing, acting, dancing, and watching comedies or adventure movies.

Show 361, Brunswick, ME
I. Intermezzo in A minor and III. Ballade in G minor from 6 Klavierstücke, Op.118 by Johannes Brahms

From the Top · All performers with Orli Shaham

Show 251, Potsdam, NY
"The Cat and the Mouse" by Aaron Copland