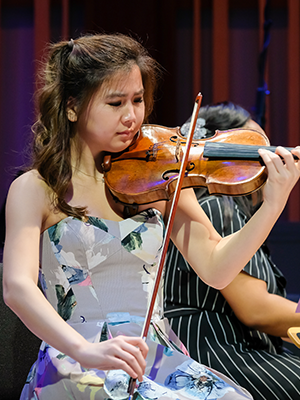 Audrey Park (violin), 16, hails from Valencia, California and attends West Ranch High School in Santa Clarita. She studies with Linda Rose. Audrey was the winner of the Santa Clarita, San Fernando Valley, Gail Newby, Parness Concerto Competitions, and the Edith Knox Performance Competition. She has soloed with the Santa Clarita Philharmonic, San Fernando and Antelope Valley Symphony Orchestras. She will perform as a soloist with the Culver City and Peninsula Symphony Orchestras this year. She has performed in venues such as Prague, Vienna, Budapest, Cremona, Montecatini, and Rome.  She was a winner in the National YoungArts Competition. She won the WGStill Art Center’s Young Artists Competition and GCC Music Competition receiving scholarship.  In addition she was the first place winner of the Great Composers International Music Competition. As a chamber musician she was a winner of the ENKOR International Music Competition with her quartet. In addition, she won silver at the PCM National Chamber Music Competition with her trio; they will be competing at the Fischoff National Chamber Music Competition. Audrey has also attended Montecito and Bravo International Music Festival with scholarship and was invited to participate in Glenn Dicterow’s, Cho-Liang Lin’s, and Jan Sloman’s masterclass. Audrey performed with guest artists Hilary Hahn, Gil Shaham, Adele Anthony, Cho-Liang Lin, and Kyoko Takezawa at the La Jolla Music Society Summerfest. This summer, she will attend Curtis Institute of Music Young Artist Summer Program and Juilliard School of Music Starling-Delay Symposium as a Student Artist. She enjoys teaching violin, spending time with family/friends, horse-back riding, and skiing/snowboarding.