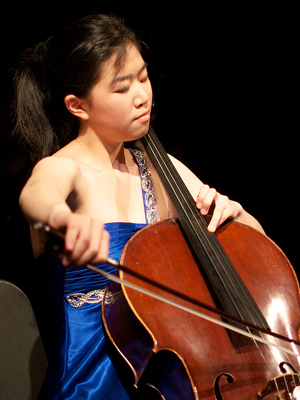 Audrey Chen (cello), 17, is from Redmond, Washington where she attends Interlake High School. She studies cello with Kai Chen. Audrey is a member of the Bellevue Youth Symphony Orchestra and the Interlake High School Chamber Orchestra. She was a member of the National Youth Orchestra of the United States of America in its inaugural season and has attended the Seattle Young Artists Music Festival and the National Symphony Orchestra Summer Music Institute. Audrey was chosen as a concerto winner in the 2013 Seattle Young Artists Music Festival, and she was the national third place winner of the MTNA Senior Division Strings Competition in 2014. Outside of music, Audrey enjoys bike riding, fencing, creative writing, reading, and trying new foods.

Audrey is a member of the Center for Development of Arts Leaders (CDAL) in Boston.
Class Year: 2016

Show 289, Seattle, WA
Variations on a Theme by Rossini by Niccolò Paganini