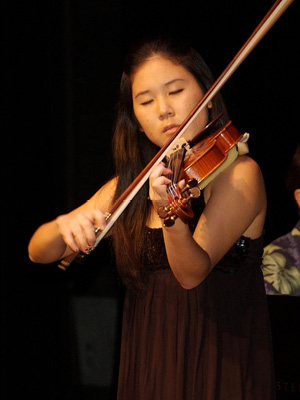 Asia Doike (violin), 17, lives in Honolulu and is a recipient of From the Top’s $10,000 Jack Kent Cooke Young Artist Award. A student of James Stanford of the Honolulu Symphony, Asia began her violin studies at six. She is a member of the Hawaii Youth Symphony (HYS), and concertmaster of Youth Symphony I, HYS’s top orchestra. This year, she tied for first place in the Hawaii Music Teachers Association high school division. She has also received honorable mentions from the Music Teachers National Association Southwest Regional Junior Division and the Mozart Festival in Honolulu. She has received scholarships from the Morning Music Club of Honolulu and the National Symphony Orchestra’s Summer Music Institute in Washington, D.C. Asia has participated in masterclasses with Mauricio Fuks and Jeremy Bell at the Indiana University’s Summer String Academy, and private lessons with Mimi Zweig and Sherry Sinift. In her spare time, she enjoys going to the beach, shopping, watching movies, and practicing yoga.