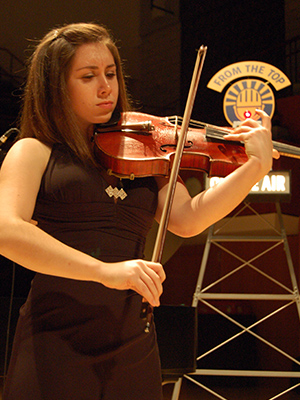 Arianna Smith (viola), 17, is from Saint Charles, Illinois. She is a first year Bachelor of Music student at the Colburn School Conservatory of Music. Formerly a student of Roland and Almita Vamos at the Music Institute of Chicago, she has performed at venues such as the Kennedy Center in Washington D.C., Symphony Center in Chicago, and has received first prize awards in the Fischoff National Chamber Competition, the Society of American Musicans, and various other chamber music competitions. Arianna has performed and worked alongside Itzhak Perlman, Gustav Dudamel, Rachel Barton Pine, the Pacifica Quartet, Ilya Kaler, Robert Mann, Heidi Castleman, and Joel Smirnoff. She has attended the Perlman Music Program, the Aberdeen International Festival, the Idyllwild Arts Program, and Astona International Music Festival in Switzerland.

Show 228, Athens, GA
From My Heart and Circus by Paul Coletti