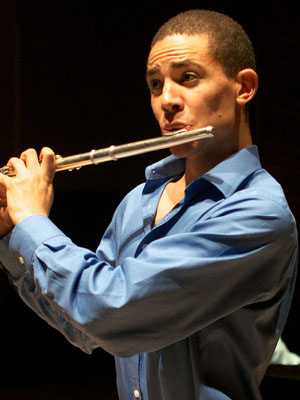 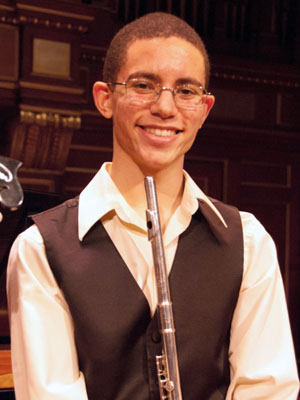 Anthony Trionfo most recently performed on Show 294, recorded in August 2014, at the age of 19.

Anthony Trionfo (flute), 19, is originally from Las Vegas, Nevada, and is currently working on his Bachelor of Music Degree at the Colburn Conservatory in Los Angeles under the tutelage of James Walker. He completed his high school studies in Michigan at the Interlochen Arts Academy, studying with Nancy Stagnitta. As a soloist he has been invited to play in Carnegie Hall, and has performed concertos with the President’s Own Marine Band, Las Vegas Philharmonic, and the Interlochen Arts Academy Orchestra as a winner of their respective concerto competitions. In 2013, Anthony was a first prize winner of the Alexander and Buono International Flute Competition as well as a winner of the National YoungARTS Foundation Competition. As a recipient of the Jack Kent Cooke Young Artist Award, Anthony made his first appearance on From the Top in 2012. At the Aspen Music Festival and School, Anthony studied with Nadine Asin and was the runner up in the Woodwind Concerto Competition. Outside of Music, Anthony enjoys eating, dancing, and reading.

From the Top · Anthony Trionfo, Flute

From the Top · Anthony Trionfo, Flute