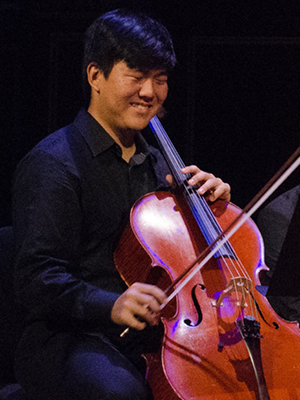 Anthony Choi (cello), 18, from New York, New York, began his musical studies at age 4 after being accepted to the highly selective Special Music School. At the age of 9 he was invited to join Face the Music, a leading contemporary youth ensemble. Following his graduation from SMS, Anthony was accepted into The Juilliard School Pre-College Division. He has performed solo and chamber music in Alice Tully Hall, Paul Recital Hall, Morse Hall, Peter Jay Sharp Theater, and Wilson Theater. He was principal cellist of the Juilliard String Ensemble and Pre-College Symphony multiple times and was a lead cellist of the Heartstrings Cello Ensemble. Anthony was chosen as a 2018 National YoungArts Finalist and 2019 Presidential Scholar in the Arts. During the summers of 2017 and 2018, he attended Morningside Music Bridge (MMB), allowing him to study with renowned cellists such as Laurence Lesser, Na Mula, Andres Diaz, Peter Stumpf, and Paul Katz. He recorded Bach and Weinberg for the Morningside Music Bridge CD, and his chamber group was chosen to perform in the MMB highlights concert. Anthony has won top prizes at the 2018 Lyra Music Competition, 2017 International Grande Music Competition, and the 2016 Rondo Vanguard Young Artist Competition.