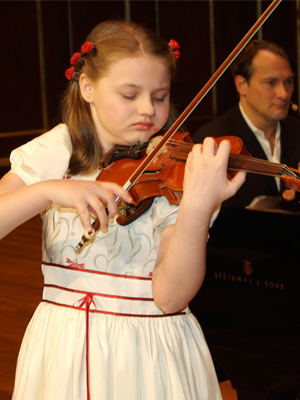 Ania Filochowska appeared on Show 132, recorded in January 2006, at age 12. She also appeared on Season 1 of From the Top at Carnegie Hall. Watch the episode here.

Program bio from From the Top at Carnegie Hall:

Ania Filochowska (violin), 12, is a student at the Juilliard Pre-College division where she studies with Itzhak Perlman. A native of Poland, Ania has performed in Austria, Italy, Germany, Holland and Israel. Ania now lives in Crawford, NJ, is a seventh grader at the Hillside Avenue School and a recipient of From the Top’s Jack Kent Cooke Young Artist Award. She additionally received the Jack Kent Cooke Foundation’s Young Scholars Award in 2006. In her free time, she enjoys swimming, jogging and watching sentimental movies.