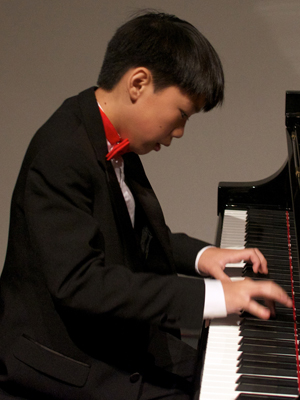 Andrew Li (piano), 14, is from Lexington, Massachusetts, is an eighth grader at Jonas Clarke Middle School in Lexington, Massachusetts. Andrew has been studying piano with Ms. Dorothy Shi of Newton, Massachusetts since he was six. Currently, he studies piano with Professor Wha Kyung Byun of New England Conservatory. He has won first prize in the Bay State Piano Competition for five years consecutively since he was 7. In 2009 and 2010, Andrew won first prizes in the Steinway Competition in Boston in Division One and Division Two. In June of 2013, Andrew performed at the prestigious Rockport Chamber Music Festival. He previously appeared on From the Top as a member of The Brioso Trio, taped in San Marcos, Texas, in June 2013. When he does not play the piano, Andrew enjoys playing the violin. For recreation, Andrew enjoys playing baseball and basketball, as well as reading history and fiction.