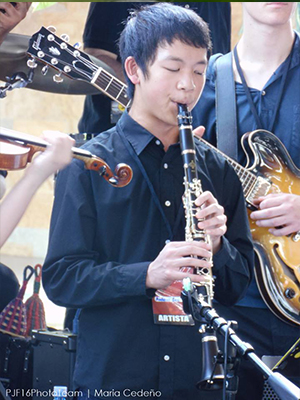 ANDREW LEE is currently an undeclared freshman at Northeastern University and a fresh graduate of the Cambridge Rindge and Latin School. Andrew began playing the piano at age 7, and started studying with Lyubov Shlain through the Longy School of Music at age 8. He is a multiple-time winner of the MMTA Bay State Piano Contest and has also won a concerto competition at Longy playing a double piano concerto with his brother, Albert. Andrew has participated in master classes with Victor Rosenbaum and Max Levinson. Andrew also plays the clarinet and saxophone, and with the three instruments has experience playing with a variety of ensembles, including orchestras, concert bands, jazz bands, choruses, pit orchestras, chamber music, the MMEA Eastern District orchestra, and the MMEA All-State concert band. Last January, he performed at the Panama Jazz Festival with one of his school’s jazz bands. An obscure one of Andrew’s other interests is the commercial aviation industry, which manifests itself in ways such as an active collection of over 100 airline inflight magazines from around the world.

Andrew is a member of the Center for Development of Arts Leaders (CDAL) in Boston.
Class Year: 2017