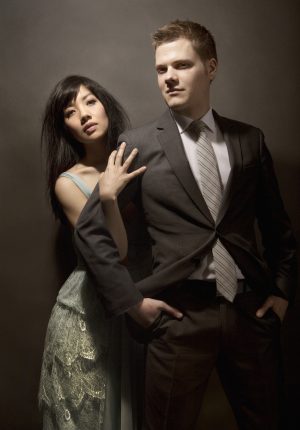 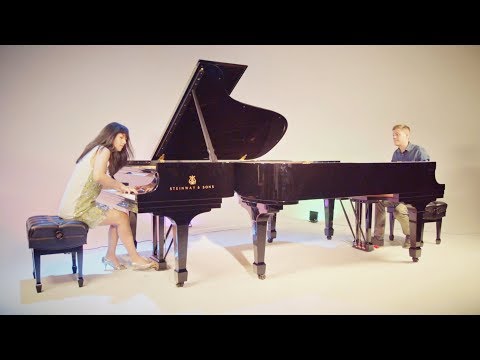 Greg Anderson appeared on From the Top Show 21 when he was 18 years old. Today, he is one half of the sensational piano duo – Anderson & Roe – with collaborative partner Elizabeth Joy Roe. They guest-hosted two From the Top episodes recorded at the Center for the Performing Arts at George Mason University on February 29, 2020 in Fairfax, Virginia.

Anderson & Roe
Known for their adrenalized performances, original compositions, and notorious music videos, GREG ANDERSON and ELIZABETH JOY ROE are revolutionizing the piano duo experience for the 21st century. Described as “the most dynamic duo of this generation” (San Francisco Classical Voice), “rock stars of the classical music world” (Miami Herald), and “the very model of complete 21st-century musicians” (The Washington Post), the Anderson & Roe Piano Duo aims to make classical music a relevant and powerful force around the world. Highlights of the 2019/20 season include performances throughout North America, Europe, and Asia; a stint as guest hosts of NPR’s From The Top; the release of nearly a dozen new music videos; and a multi-week residency at the Tippet Rise Art Center as recitalists, recording artists, and filmmakers.

Anderson & Roe met in 2000 as freshmen at The Juilliard School and formed their dynamic musical partnership shortly thereafter. They have since toured extensively, with notable recitals in the United Kingdom, Switzerland, Germany, Austria, Italy, Estonia, Romania, Israel, Singapore, China, Hong Kong, Taiwan, South Korea, Japan, New Zealand and most major US cities, as well as in nearly every New York City venue imaginable, from Carnegie Hall to children’s hospitals. Additionally, they have appeared at the Gilmore and Gina Bachauer International Piano Festivals, the Mostly Mozart and Styriarte Festivals, and at dozens of summer chamber music festivals. Their orchestral engagements include appearances with the orchestras of San Francisco, Vancouver, Rochester, Liverpool, Calgary, and Boulder, among others, and with members of the Metropolitan Opera Orchestra.

Anderson & Roe’s discography comprises five critically albums which have spent dozens of weeks at the top of the Billboard Classical Charts, and a live performance by the duo was handpicked to appear on the Sounds of Juilliard album celebrating the school’s centennial year. Their Emmy-nominated, self-produced music videos have been viewed by millions on YouTube and at international film festivals. Their scores are published by Alfred Music on the “Anderson & Roe Duos & Duets Series” and by Awkward Fermata Press.

The duo’s innovative exploits have captured the attention of such media outlets as MTV, PBS, NPR, APM, and the BBC, as well as Gramophone, Clavier Companion, Listen, and Pianist magazines, and the Huffington Post. They are profiled in Nick Romeo’s book, Driven, and in 2017 they served as hosts for the 17-day medici.tv webcast of the 15th Van Cliburn International Piano Competition. In recognition of their singular vision for the advancement of classical music, they have been invited to present at numerous international leader symposiums, including EG (Entertainment Gathering), the Imagine Solutions Conference, Chicago Ideas Week, and Mexico’s Ciudad de las Ideas.

Anderson & Roe believe strongly in the communicative potential of music, and their performances, compositions, websites, videos, recordings, and writings all serve this mission, bringing joy to people around the world. As stated by the Northwest Reverb, “[Anderson & Roe] swept the audience into a cheering mass of humanity, making a strong case that playing piano is the most fun thing that two people could ever do together.”