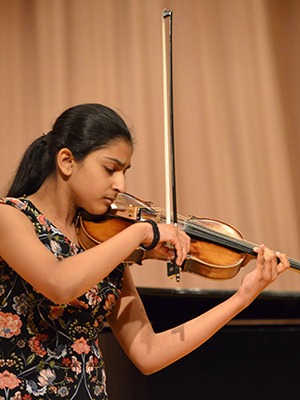 Anagha performed on Show 392 from Turtle Studios in Philadelphia, Pennsylvania, recorded on October 25, 2020.

Anagha Kapsi (violin), 15, hails from Exton, Pennsylvania and is in the tenth grade at the Pennsylvania Leadership Charter School where she is in the University Scholars Program. She studies music through the Music School of Delaware and the Settlement School of Music. Anagha is a member of the Philadelphia Music Alliance for Youth, the Settlement Music School’s Advanced Study Ensemble, and the Philadelphia Youth Orchestra. In addition to playing violin, she also conducts and composes. Some of Anagha’s proudest accomplishments have included composing a string quartet for a Holocaust awareness project, winning the Delaware Concerto Competition for Young Musicians, conducting a piece with the Delaware Orchestral Chamber Music Institute’s Symphony Orchestra, and creating a volunteer project for young musicians to help raise money for local food banks. Outside of music, she enjoys sketching, reading, origami, crocheting, mountain-biking, and learning about other cultures.