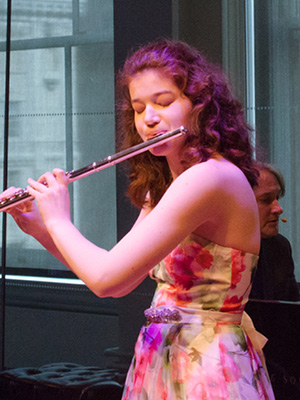 Alison Addie (flute), 18, is a senior at DuPont Manual High and the Youth Performing Arts School (YPAS) in Louisville, Kentucky. She is a recipient of From the Top’s Jack Kent Cooke Young Artist Award and is a student of Kathy Karr and formerly Donald Gottlieb. She has participated in numerous honors ensembles, won several solo competitions, and performed in multiple masterclasses throughout her high school career. In 2016, Alison underwent jaw surgery, a setback which required relearning the flute. As an avid arts’ advocate, Alison participated in Abrams’ Kids, a mentorship program with Louisville Orchestra conductor Teddy Abrams that culminated in a presentation to about 1,000 students from her school district. In addition, she was a Louisville Leopard Percussionist for six years under the direction of Diane Downs. Outside of music, Alison enjoys coloring, completing puzzles, and playing basketball.