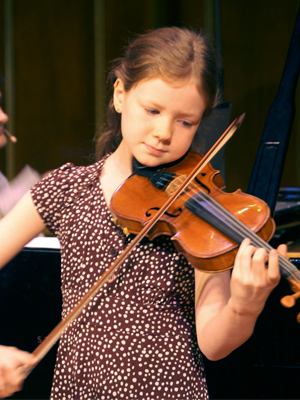 Alice Ivy-Pemberton will perform on Show 356 on May 15, 2018 in Boston Massachusetts. Her other appearances on NPR’s From the Top with Host Christopher O’Riley include: Show 302, as part of the Perlman Music Program String Quartet, recorded in February 2015; and as a soloist on Show 174, recorded in February 2008, as well as on From the Top Live From Carnegie Hall, the PBS Television show, Season 2, Episode 8.

Alice Ivy-Pemberton began fiddling at age four and studied violin with Nurit Pacht at the Kaufman Music Center in New York for ten years. At age ten, she performed on NPR’s “From the Top,” and was also featured as a soloist on the PBS series “From the Top: Live from Carnegie Hall.” She has won numerous concerto competitions, including those of the New York Chamber Players’ Orchestra, Ensemble 212, the Sound Symphony, and the Greenwich Village Orchestra. The Conservatoire Américain de Fontainebleau awarded Alice its prestigious Prix du Directeur in 2016; she also took the audience prize at the Conservatoire’s Prix Ravel competition. In 2018, Alice won The Juilliard School’s Violin Concerto Competition and performed John Corigliano’s Red Violin Concerto with the Juilliard Orchestra led by Jeffrey Milarsky at Alice Tully Hall, in celebration of John Corigliano’s 80th birthday. In April of 2018, she played the world premiere of Juilliard composer Marc Migo’s Nocturne for violin, piano, and orchestra, again at Alice Tully Hall and led by Maestro Milarsky. Praised by the New York Times for her “sweet-toned playing,” she has performed as a soloist in many venues in New York, including Bargemusic, Zankel Hall, Merkin Concert Hall, and the Stern Auditorium/Perelman Stage of Carnegie Hall. A proud recipient of a Kovner Fellowship, Alice is pursuing her Bachelor of Music degree under the tutelage of Itzhak Perlman and Catherine Cho at The Juilliard School.

From the Top · Alice Ivy-Pemberton, Violin