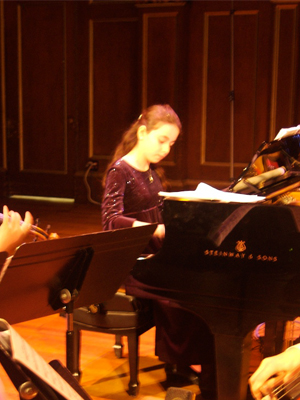 Alice Burla (piano), 14 comes from Ossining, NY and began studying piano when she was 4 with her mother and Larisa Niurenberg. She made her orchestral debut at the age of 5 and played her first solo recital at 6. Alice has appeared on From the Top at Carnegie Hall on PBS as well as on a past radio broadcast with her trio. She studies piano with Dmitri Bashkirov at the Juilliard School Pre-College Division. In 2002, she was the youngest winner of the National Final of the Canadian Music Competitions and since the age of 10 has performed internationally on multiple occasions. Before receiving the Jack Kent Cooke Young Artist Award as part of her appearance on From the Top, Alice was also a 2010 recipient of the Jack Kent Cooke Foundation’s Young Scholars Award. In addition to piano, Alice enjoys dancing, swimming and playing with her big brother.

Show 224, Bethlehem, PA
Prelude and Fugue No.2 in A minor by Dmitri Shostakovich and Concert Etude No.1, Prelude by Nikolai Kapustin

From the Top · Alice Burla, Piano