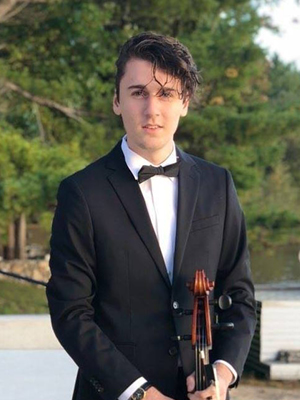 Alexander appears with the Interlochen Arts Academy Orchestra on Show 368 taped on March 15, 2019.

Alexander Smith (cello), 18, is a senior at the Interlochen Arts Academy and a recipient of From the Top’s Jack Kent Cooke Young Artist Award. He started studying cello at the age of 3 in Hamilton, Ontario. Alexander has been chosen as two-time Nebraska state winner, regional winner and national finalist in the Music Teachers National Association (MTNA) competition, winner and finalist in many concerto competitions (Texas Strings Festival; UNK’s Vivaldi Competition, Interlochen Concerto Competition finalist). He has performed in the master classes of Robert deMaine, Stefan Jackiw, Jonah Kim, David Garrett, Andrew Yee, Blaise deJardin, Misha Quint and Joshua Roman among others and has participated in many summer music festivals, including the Interlochen Center for the Arts’ Cello and Orchestral Institutes where he was a consistent member of the World Youth Symphony Orchestra. He frequently performs chamber music and has worked with many world-class ensembles such as the Attacca, Amernet, Ariel, Friction and Chiara Quartets. Before transferring to Interlochen, he was a Jasper Merit scholar at the Omaha Conservatory of Music (OCM), principal cellist of Nebraska All-State Orchestra, a member of the Omaha Area Youth Orchestras, and Orchestra Omaha, and worked as an assistant teacher in OCM’s Sprouts program for preschool children. When not playing cello, he enjoys alternative forms of the fine arts, as well as composing his own music, attending car shows, and collecting watches. He was a member of the National Honour Society, International Baccalaureate Student and President of Omaha Central High School’s Tri-M National Music Honors Association Chapter.