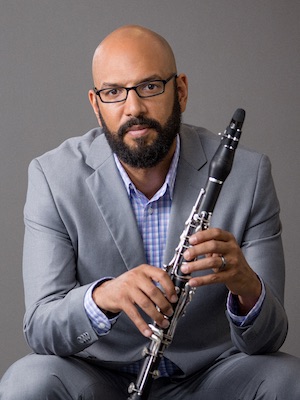 Alex Laing joined From the Top’s new team of Co-Hosts and Creatives in 2020. Read more.

Alex Laing’s work represents a modern take on orchestral practice. Principal clarinet of The Phoenix Symphony, he is active as a performing and teaching artist, passionate and curious about design and learning, and actively exploring the push and pull between a legacy art form and its unfixed future.

In addition to his work with The Phoenix Symphony, recent seasons have found him contributing his sound in a range of other projects including: as a soloist with the Sphinx Virtuosi at Carnegie Hall, with Lawrence Brownlee (in both the world premiere and visual recording of Tyshawn Sorey’s Cycle of My Being), with the Re-Collective Orchestra (in the 2019 soundtrack recording of Disney’s The Lion King) and as a member of Gateways Festival Orchestra.

Alex is frequently sought for his thought leadership and has been an invited speaker to the annual conferences of both the Association of British Orchestras and the League of American Orchestras where, in 2019 he was a keynote speaker. Shaped around his belief that ‘music isn’t just sound; it is sounds, and words, and people’, his practice has been honored, most recently with a 2018 Sphinx Medal of Excellence and in 2017 named one of Musical America’s Professionals of the Year.

As a teacher he has been a frequent collaborator with the Los Angeles Philharmonic’s YOLA (Youth Orchestra Los Angeles) program, and a faculty member for both the National Youth Orchestra of the United States of America (NYO-USA) and the League of American Orchestras’ ‘Essentials of Orchestra Management Seminar’. He’s currently lead faculty for the YOLA National Institute and serves on the board of directors for Gateways Music Festival and Arizona School for the Arts.

A graduate of Northwestern University, Alex received his master’s degree in Orchestral Performance from the Manhattan School of Music, an artist’s diploma from the Sweelinck Conservatorium Amsterdam and a certificate in nonprofit management from Arizona State University’s Lodestar Center for Philanthropy and Nonprofit Innovation.