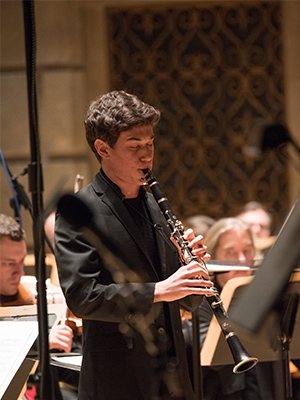 Alec Manasse (clarinet), 18, is from New York, New York, and attends the Juilliard School, where he won the concerto competition and performed the complete Mozart Clarinet Concerto with the orchestra when he was in high school. Alec appeared on From the Top with the Rochester Philharmonic in 2016. In his spare time, he enjoys learning about Chinese Medicine, watching stand-up comedy, and playing sports with friends.

Alec Manasse (clarinet), 17, is from New York City, and attends LaGuardia High School while studying clarinet with Laura Flax in The Juilliard Pre-College Division. While at Juilliard, he won the concerto competition and performed the complete Mozart Clarinet Concerto with orchestra. He attends Eastern Music Festival in the summer time, and has also won the concerto competition there. Outside of music Alec loves comedy and thinks that hilarity is beautiful.

Show 316, Rochester, NY
II. Adagio and III. Rondo: Allegro from the Concerto for Clarinet and Orchestra in A major, K. 622, by Wolfgang Amadeus Mozart