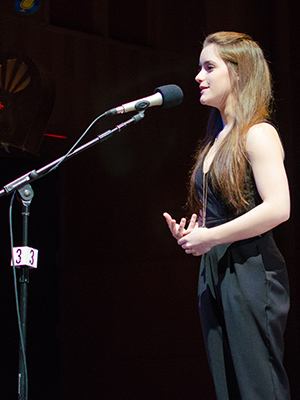 Aiyana Tedi Braun (composer), 18, is originally from Tel Aviv, Israel, but lived in Havertown, Pennsylvania, where she graduated from Haverford High School in 2015. She attended The Juilliard School’s Pre-College Division in New York City as a student of Dr. Manuel Sosa and Dr. Ernest Barretta. She had her first orchestra piece premiered by the New York Philharmonic in 2013 at age 15. Aiyana is the recipient of many awards including the Classical Composition Award in the National Young Arts Competition, the National American Composer’s Forum “Next Notes” Competition, and more. She is now a freshman at the Curtis Institute of Music in Philadelphia, Pennsylvania, studying with Dr. David Ludwig, Dr. Jennifer Hugdon, and Dr. Richard Danielpour.